Domestic wind turbine, all you need to know

Home » Blog » Domestic wind turbine, all you need to know 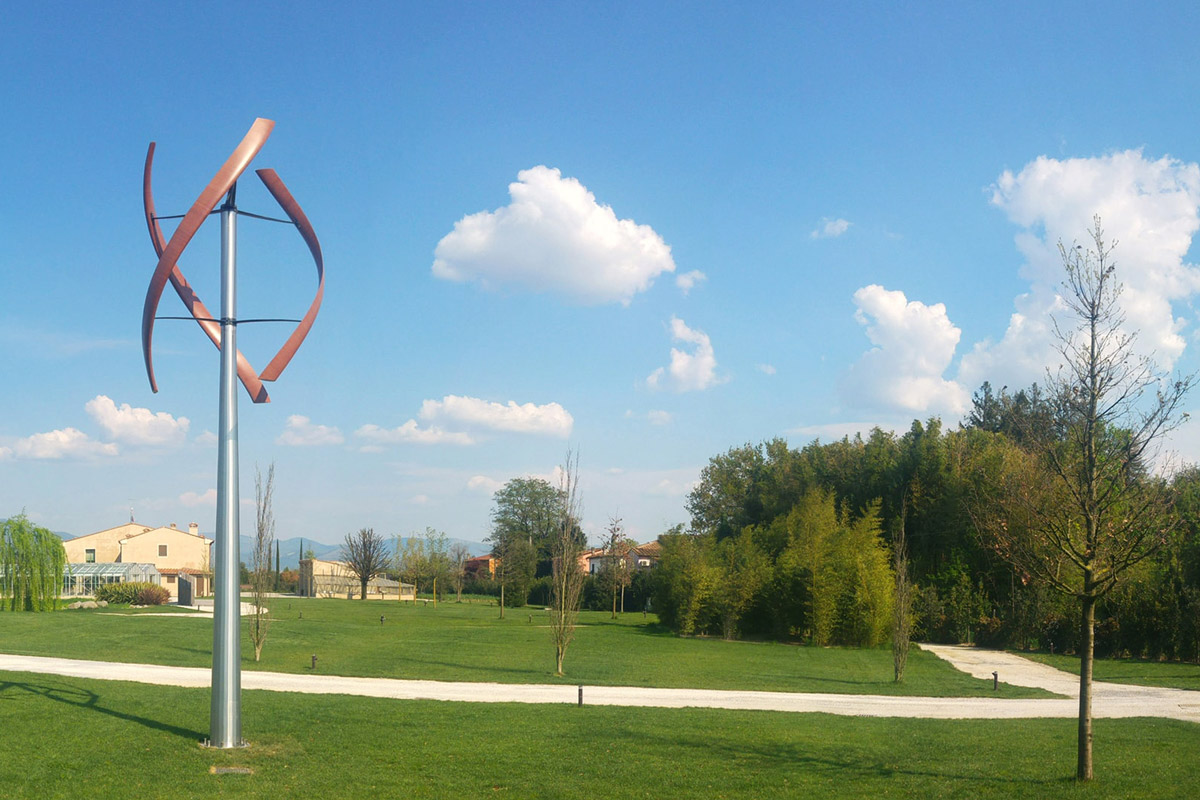 How to install a vertical micro wind system for domestic users?

Energy saving, these are perhaps the two words most used in this period, both for a purely economic purpose (who would not want to save on the bills?) and for an environmental issue.

Wind energy is in fact a renewable energy source with almost zero environmental impact, if we consider the production phase, a clean technology with no CO2 emissions into the environment.

Nowadays there are installations of photovoltaic panels that 20 years ago seemed to be intended only for a few while today they are installed in every new building under construction or in building renovations for energy redevelopment. With the new European plan called “Repower EU” we are moving towards a legal obligation for installations on new buildings and in general, towards a strong incentive for energy from renewable sources for domestic use.

How does a domestic wind power plant work?

The basic functionality consists in capturing the energy of the wind through the rotor that by rotating allows the alternator to produce clean electricity by exploiting the kinetic energy of the wind. The inverter will then transform the direct current into alternating current.

To the question “how much wind is needed for a micro wind turbine”, we could therefore answer that the generation of electricity for an Enessere micro turbine starts from 4 m/s in the order of a few hundred watts up to over 4kw with an average wind level of 14 m/s. Over a year, an ENESSERE wind turbine can produce about 2,000kwh in low-wind areas (average 4m/s) up to over 12,000kwh in very windy areas (average 7m/s).

Enessere’s domestic wind systems consist of a rotor, a steel supporting structure and a control panel with integrated inverter. The entire Enessere system also has an extensive sensor system to make it intelligent, reliable and safe:

What is the vertical axis micro-wind turbine and why is it convenient?

Let’s start by explaining what is the difference between the two types of existing wind turbines: turbines with a horizontal axis and with a vertical axis.

Horizontal wind turbines are the classic ones we have been used to for some time, the ones that we usually find in wind farms and are large in size. The word “horizontal”, which defines them, means that the rotation axis of the turbine is parallel to the ground. For this feature they need to be correctly directed to best intercept the flow of winds.

The vertical axis wind turbine is instead used more frequently in the small sizes of micro-generation and has the considerable advantage of not having to reposition itself in the presence of wind jumps since the turbine rotates on a vertical axis with respect to the ground, so as to be able to exploit the winds from every direction they come.

Below you can see an example of an Enessere vertical micro wind turbine.
Try out the configurator!

What are the advantages of a vertical micro wind system?

The vertical micro wind system has many advantages, let’s see which ones briefly.

What do you need to install a home wind system?

For the first type, in addition to the wind generator, a certified inverter is required and it should comply with the national regulations in which the system is installed. Enessere offers a complete, functioning and turnkey system consisting of the wind generator, ie the complete rotor with support tower and electrical panel with integrated inverter, all certified for the EU.

For the second type of system, OFF-GRID, in addition to the aforementioned inverter, it is necessary to add a charge controller for the batteries to ensure that recharging is done in a safe and reliable way.

For each installation, a base plinth must be installed on the ground, approximately 3x3x1 m, depending on the suitability and nature of the ground.

In the image below we see the types of plinths available:

What authorisations do you need to install a home wind turbine system?

There are no restrictions or impediments to installation given that the structure is less than 11m and the installed power is less than the 60kw installed, therefore only simple administrative procedures relating to the plinth (SCIA) and filing of a connection application to the energy manager of the area (GSE) are required.

How many years does a wind power plant last?

An Enessere installation, thanks to the quality of the materials and workmanship, is guaranteed for at least 25 years of operation with a routine and scheduled maintenance.

Where can you install the wind turbines for home use?

Enessere wind turbines are exclusively positioned on the ground by means of a base plinth in reinforced concrete. There are no anchors on roofs or balconies or on support towers other than those supplied by Enessere.

About the installation site, a windy site is preferable and as far as possible away from obstacles that can disturb the flow of air. If the spaces available are limited, the installation must take place at least 10 meters from neighbouring buildings.

How many kW does a domestic wind turbine produce?

Let’s make a clarification on the difference between power and energy.

The kW indicate the instantaneous power required to make any object work instant by instant. For example, a dishwasher requires about 2000W (2 kW) on the national electricity grid to run every moment. The nominal power of the Enessere turbine is 4 kW, that is, at maximum speed it is able to power users for a total of 4 kW moment by moment.

The kWh indicate the energy used and is the product of the energy times the time of use. Taking the example of the dishwasher, you will have that if it has been running for only half an hour it will have consumed an energy of E=2000W*(1h/2)=1000Wh, or 1kWh.

As for the energy generation of a wind turbine, it all depends on the availability, the intensity of the wind and the duration of its presence so that the turbine can rotate, so as to produce electricity.

Enessere can provide interested parties with an estimate of annual energy producibility for the hypothesised place starting from the geo-coordinates of the potential installation site: with this simulation, the customer has a prudent idea of the annual kWh production that the Enessere wind power could produce according to the wind averages available on the wind atlases on the web.

Being “intelligent” wind turbines, the Enessere micro turbines improve over time: in fact, by recording the real wind data of the site, thanks to the proprietary software, they can remap the power curves so as to improve their performance over time of operation.