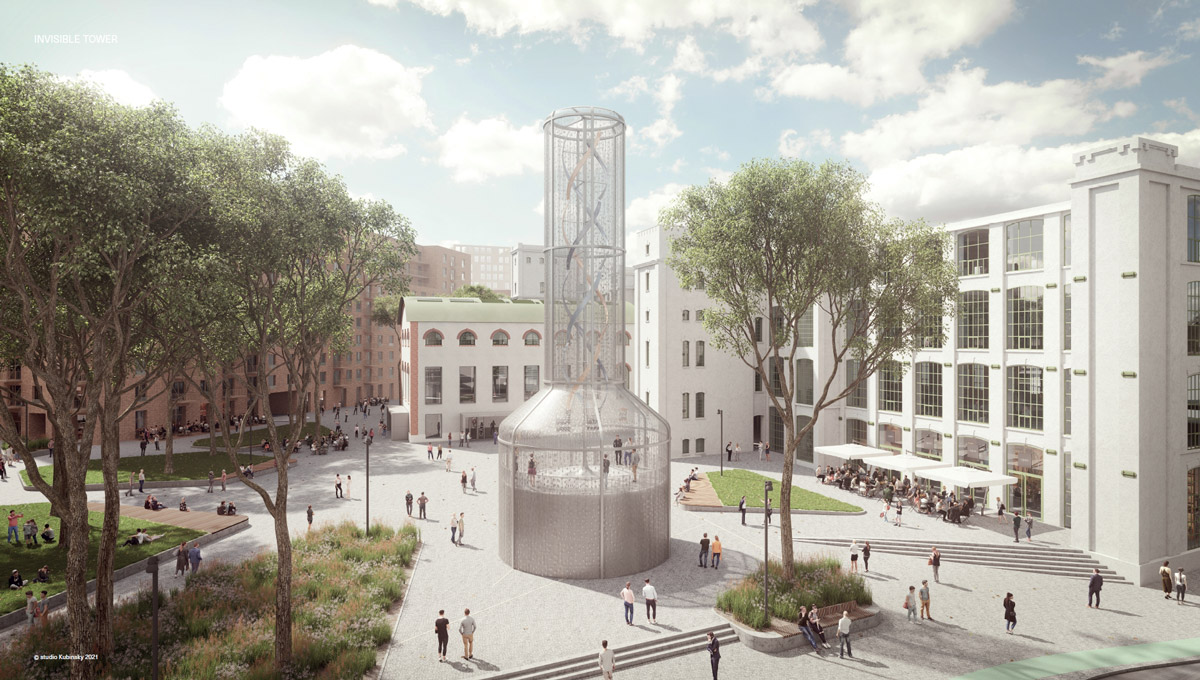 The starting point for the tower’s visual and technical design is the “popular mythology” of the place,associated mostly with the industrial past of the area, and in particular with the motif of a thread ora yarn.

Rather than through a direct thematic reference by means of shape, it is materialized througha dynamic presentation of the vibrant moves of spinning yarns, a regular rhythmic of a quivering machinework, and an indication of a memory reminding us of an architectonic fragment of the plant(a tower or a chimney as a significant vertical, a point for orientation).

The visual representation of thetower derives from the image of phantom-like delicacy (invisibility of the tower) emphasized by a rotationmovement of the tower core. The core is composed of intertwined line curves—conjointly coordinatedblades of vertical wind turbines that are made of coloured carbon fibres; the outer casing is designed asa “fine veil”, cut out with engineering precision from perforated sheet metal, which does not prevent theflowing of the wind (in the prevailing direction of the yard’s axis) and so allows the turbines to swivelnaturally.

Hence the work stands at the point of intersection among the visual/plastic arts, architecture,and technical design and construction—communicating its artistic essence in a comprehensible and,what is more, in an environmentally friendly way (the tower is „green“ because it is energy-sufficient, asit generates the electric current).

The visual design is not a definitive and dominating visual sign of theplace, but rather an open, harmonizing, and integrating structure with a clear identity (symptomaticallyemphasizing the walk line) on the one hand; and on the other also permitting creative work to furtheranimate the public space (for example through lighting, video-mapping, sound and so on).

The tower isdefined by unobtrusive and visually refined references to the past of the premises (such as the spinningmovement or cotton-like texture in the perforation pattern of casing), and also by identifiable values ofthe times when it was built (high-tech, smart-solution, ecology, and inclusion).